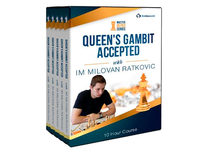 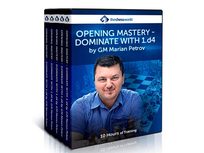 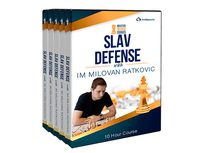 Get an Exciting Attacking Opening That You Know Far Better Than Your Rivals Do!

Ever thought that d4 players have things too easy? They pretty much know they’re going to be facing either the King’s Indian or Slav/QGD and they get to choose which variation gets played. Ruin your opponent’s prep as early as move 2 with the Queen’s Gambit Accepted. This logical but rarely played opening is full of aggressive counter-play for Black – and lets you dictate play. This course will teach you modern dynamic methods to unleash a storm of tactics against White, natural forcing opening moves, and casting secrets. This is a complete attacking repertoire from one of the top young coaches in chess today.

IM Milovan Ratkovic (FIDE 2411) is a Serbian International Master and chess coach. Some of his top students were able to reach 2400 and 2300 Elo respectively. IM Ratkovic is an active tournament player and one of his near-future goals is obtaining the Grandmaster title.

Build a Pro-Level Opening Repertoire After 1.d4 & Finally Become the Player You Meant to Be

Wouldn’t it be great to spend just a few hours getting all the opening knowledge you need for the years to come? Wouldn’t that make you a much more prepared, versatile, and overall better chess player? That’s exactly what Opening Mastery – Dominate with 1.d4 is about! This is the ultimate shortcut for club players to get a pro-grade opening preparation after 1.d4. You will know exactly how to play against and beat players in the 10 most widely played openings after 1.d4: London System, Queen’s Gambit Accepted, Queen’s Gambit Declined, Slav Defense, Benoni Defense, Kings Indian Defense, Nimzo Indian Defense, Grunfeld Defense, Dutch Defense, Tarrasch and Chigorin Defense! No more second-guessing, worrying about what your opponent plays, or facing unknown opening lines.

GM Marian Petrov (FIDE 2537) is an accomplished professional chess coach, theorist, and Bulgarian champion for 2002 and 2017, as well as winner of many open tournaments around the world. Also a FIDE trainer and coach of the team of Wales at the last Olympiad in Baku in 2016. He graduated from the National Sports Academy in Sofia, Bulgaria with a Bachelor’s degree in Chess Pedagogy, a four-year undergraduate program designed to prepare top-level chess trainers.

Everything You Need to Make White Question Why He Ever Dared to Play the 1.d4 Against You!

It’s no secret that black is supposed to “equalize” before even attempting to get an advantage in the opening, but in the age of powerful AI-based chess computers, this has changed. In a mind-blowing 10 hours of openings training, IM Ratkovic breaks down his repertoire in plain language and arms you with the favorite opening of 11 world champions… the Slav Defense! Black keeps it simple (for now) and adapts with aggression based on how white develops. This course has everything you need to make white question why he EVER dared to play 1.d4 against you!

IM Milovan Ratkovic (FIDE 2411) is a Serbian International Master and chess coach. Some of his top students were able to reach 2400 and 2300 Elo respectively. IM Ratkovic is an active tournament player and one of his near-future goals is obtaining the Grandmaster title.